Last Thursday, April 5th, a group of outstanding young artists were recognized at the eleventh annual Award for Excellence in the Visual Arts Reception. This was held at Columbus College of Art & Design’s Acock Gallery with the help of Susan Quinlan, Kelly Malec-Kosak, and Tim Rietenbach.

The evening began with a student panel discussion featuring the six finalists:

From there, the reception portion officially began. Stacey Dorr, AICUO’s Vice President, Operations and Communications spoke as the master of ceremonies. CCAD'S President, Melanie Corn, welcomed everyone to the Acock Gallery and CCAD's campus. Key sponsors, first and second round judges, nominees, and our sculpture designer were thanked and acknowledged throughout the reception.

It was then announced that Tyler Davis of CCAD is the People's Choice Award Winner. Congratulations Tyler! 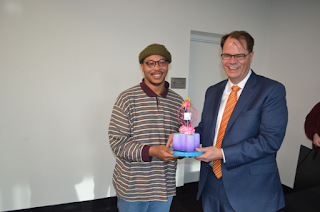 The Grand Award Winner receives a $2,500 cash prize, artwork purchased by AICUO, and artwork displayed in Governor Kasich's office for one year. Nyquon Watson of Oberlin College is this year's Grand Award Winner! 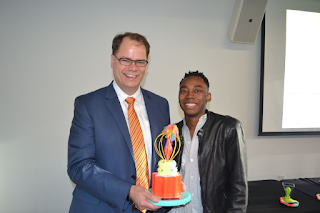 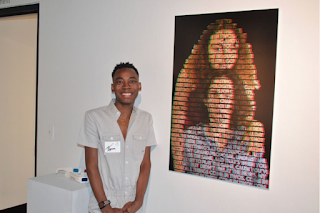 (Nyquon Watson of Oberlin College with his piece "Losing: The Two")

Thank you to everyone who participated in this year's AICUO EVA competition! Visit http://aicuoartaward.com to see the winner’s portfolios!

Posted by AICUO Award for Excellence in the Visual Arts at 6:40 AM