OBERLIN, OH--The Allen Memorial Art Museum (AMAM) celebrates the contributions of women to printmaking with the exhibition, A Century of Women in Prints, 1917-2017, which runs through December 17, 2017. For centuries, printmaking was regarded as a male-dominated medium outside the scope of socially acceptable pursuits for women. Though numerous women had nevertheless established themselves professionally as printmakers by the modern era, female artists remain underrepresented in most museum print collections to this day. Organized by Andaleeb Badiee Banta, curator of European and American Art, with assistance from Claire Rasmussen (OC ’19) and Kylie Fisher, the summer 2017 IFPDA Foundation curatorial intern, A Century of Women in Prints presents a selection of prints created by women during the course of the Allen’s first 100 years. Spanning a century and various styles (expressionism, surrealism, and minimalism, among others), and addressing distinct themes (poverty, race, gender, motherhood, war, and creativity), these prints offer a glimpse of the breadth and depth of female artists’ engagements with the medium over the past century.
Some of the artists represented in A Century of Women in Prints, whereas others engaged with printmaking only during isolated periods in their careers. The Prints of German Expressionist Käthe Kollwitz (1867-1945) feature prominently, including the woodcut Unemployment (1925), which depicts through haunting contrasts of light and shadow the destitution of a Weimar-era German family. A print by celebrated portrait artist Alice Neel (1900-1984) is also on view. Portrait of Olivia (1972) features a young girl whom Neel may or may not have known; her choice of the subject possibly reflects her difficult experiences as a young mother, including the death of her first daughter to diphtheria. Nefertiti Goodman's (born in 1949) enormous linocut print, Getting Fixed to Look Pretty (1978) portrays a black servant attending to her more affluent black employer, subverting familiar artistic tropes of African American women serving white women. The scale of Goodman’s work is in itself a statement, demanding the viewer’s attention despite traditional prejudices that marginalize both prints in general and those by black female artists especially. These figurative prints appear alongside abstract works like Athena Tacha’s Waves(1977), which represents the motion of waves through embossed, oscillating lines. Best known for her environmental public sculpture, Tacha (born in 1936) earned her master’s degree in art history at Oberlin College and subsequently worked as the first curator of modern art at the Allen.

The exhibition was developed in conjunction with the 100th anniversary of the founding of the Allen Memorial Art Museum. Curator of the exhibition Andaleeb Badiee Banta noted, “The print collection is a significant portion of the AMAM’s holdings and it made sense to create an exhibition that highlighted it. The idea to focus on women artists came about during the 2016 presidential election and the subsequent increased media attention on women and their social realities. It became apparent that the collection held exceptional works by women artists and that their display would draw attention to and celebrate the central role that women have played both in the museum’s collection and its history.”

Since its founding in 1917, the Allen Memorial Art Museum has benefited significantly from the contributions of impassioned female donors, artists, scholars, and collectors. The Allen counts four women among its directors, and A Century of Women in Prints is a testament to the museum’s efforts to champion female artists working in diverse media and speaking from distinct experiences and perspectives. 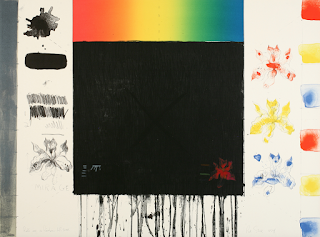 Posted by AICUO Award for Excellence in the Visual Arts at 10:33 AM