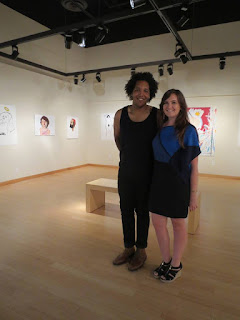 Westerville, OH—Otterbein University is hosting an exhibit of art by recent graduates and artists-in-residence Cassidy Brauner and Benjamin Willis.  The exhibitions, et al., is on display now through July 10 in the Miller Gallery, located in the Art and Communication Building, 33 Collegeview Rd. Gallery hours are 8 a.m.-4 p.m. Monday through Friday; 1-4 p.m. on Saturdays and Sundays; and closed on holidays. The exhibit is free and open to the public. For more information, call (614) 823-1792. View pieces from the exhibit at www.facebook.com/otterbeinartdepartment. See upcoming art, music and theatre events at www.otterbein.edu/artscene.

The Otterbein artist-in-residence show, et al., translates to “and others.” Ben Willis and Cassidy Brauner focus on people and the variety of questions and explorations that come from observing humans and making artwork about them.

Cassidy Brauner is from Plain City, Ohio. She received her bachelor’s degree from Otterbein in 2014, where she majored in art with concentrations in photography and visual communications. During her residency, she focused her work in the photography program. This summer her work will be in galleries in Oklahoma and at the Ohio State Fair. In fall 2015, she will pursue a master of fine arts degree in photography at Ohio University.

Benjamin Willis is from Columbus, Ohio. He earned a bachelor’s degree in philosophy and art, with a concentration in drawing, from Otterbein University in 2014. He worked in the painting studio and drawing studio during his residency. In fall 2015, he will move to Denver, Colorado, to volunteer with Americorps. He plans to continue volunteering through the Peace Corps after his service.

Otterbein University is a small private university nationally-recognized for its intentional blending of liberal arts and professional studies through its renowned Integrative Studies curriculum and its commitments to experiential learning and community engagement. Otterbein is a recipient of the 2015 Carnegie Community Service Classification; finalist for the 2014 President’s Award for Economic Opportunity Community Service; and has been honored With Distinction by the President’s Higher Education Community Service Honor Roll since the list’s inception in 2006. It consistently stands in its category’s top 20 in U.S. News & World Report’s guide to “America’s Best Colleges.”

Otterbein offers more than 70 undergraduate majors; five master’s programs; and a doctorate in nursing practice (DNP). Its picturesque campus is perfectly situated in Westerville, Ohio, America’s fifth friendliest town (Forbes), just minutes from Columbus, the 15th largest city in the country. Otterbein’s commitment to opportunity started with its founding in 1847 as one of the nation’s first universities to welcome women and persons of color to its community of teachers and learners, which now numbers 2,600 undergraduate and 400 graduate students.

Otterbein remains committed to its relationship with the United Methodist Church and its spirit of inclusion, and welcomes people of all backgrounds to Otterbein’s Model Community. To learn more about Otterbein, visit www.otterbein.edu.

Posted by AICUO Award for Excellence in the Visual Arts at 5:11 AM