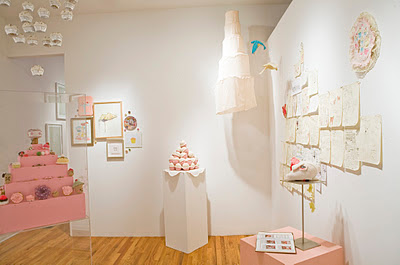 Just recently I had the opportunity to meet with one of our 2012 second round judges, Wynter Whiteside. Talking with Wynter felt like I was catching up with an old friend. She is really personable, passionate, fun, and really excited to be involved with the AICUO Excellence in the Visual Arts Awards.
Wynter is from central Ohio, attended Fort Hayes Arts and Academic High School in Columbus, Ohio and is an alumnus from the Columbus College of Art & Design. She told me that while she was at CCAD, she spent a semester studying abroad in Ireland.  She described her experience to be wonderful and beautiful and gave me the advice to bite at any opportunity I have to study abroad. So, readers, I pass that along to you as well. “Rolling hills…countryside…castles…” the imagery she was talking about sounded unreal. Any artist would be silly to not be inspired by being in such an environment.
Wynter was a fine art major. She is a painter and embroiderer who also happens to love curating. I asked how, after 8 years of being a curator, she would describe it. She said, “it’s more about producing a visual idea, an organic project, and seeing things come together”. The curated shows are “a process of thought”, she explained, “they are like a piece of artwork within itself”. She loves the instillation and “constellation of ideas” that are all brought together in one place. Just from sitting across from her and talking I could just tell how much she loves curating. “[Curating] is very fulfilling to me” she went on to say. I truly believe her.
I asked her what I thought would be a hard question to answer, “what has been your favorite show that you have curated?” Without missing a beat, her face lit up with a huge smile and she answered “Sugarcraft”. Sugarcraft was a show in 2008 hosted by Kasia Kay Art Projects in Chicago, IL. She showed me pictures and it was everything I had ever wanted to see in a gallery. I really love girly, fun, cute, silly artwork and this was exactly it. The show was filled with cute artworks from around the world. Sugary subject matter included cupcakes, cakes, and candies. It was her favorite show because it had artists from all around the globe, the gallery space was great, the woman she worked with was amazing, and she networked a ton. She told me all of the artwork was sent to her house, here in Columbus, so she had to rent a U-Haul and drive all the work to Chicago. Can you imagine?
I remember when I was in high school I saw one of her shows at the Mahan Gallery (which isn’t open anymore) in the Short North in Columbus. I was blown away. I was even more blown away that there were real tiny cupcakes sitting on little shelves as part of her artwork. From then on I have always remembered her work and was really grateful she accepted the opportunity to be one of our judges.
I asked if she was currently making work, and music to my ears the answer was “yes, for the past 4 years”. She said there is even more embroidery and the paintings are very large. I cannot wait to see them!
Along with Sugarcraft she said another one of her favorite shows she curated was “Genuine Bunny Lovers” which had bunnies in a pin in the middle of the gallery and bunny artwork on all the walls. We started talking about bunnies, my scary bunny run-ins and that I only like to pet them from far away distances. She is a bunny lover and owner and assures me that they’re harmless. We got on the subject of cats and I knew the meeting went great!
Personal Pieces 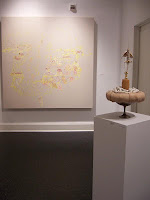 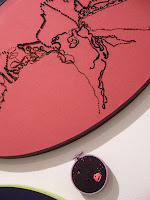 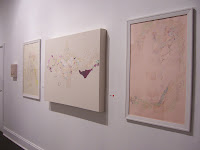 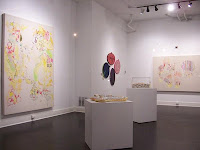 Below are images from Sugarcraft! How fun!
(The embroidered circles, painting with pink selves in photo 3 are Wynter's!) 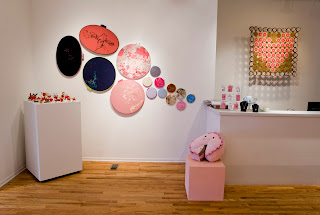 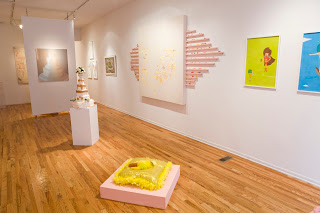 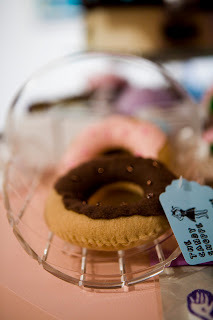 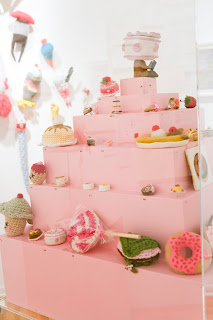 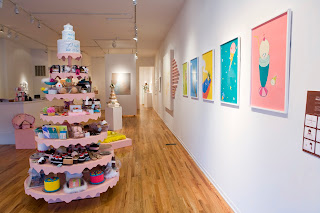 Posted by AICUO Award for Excellence in the Visual Arts at 1:36 PM