OBERLIN, OHIO--Major donations of Japanese prints to the Allen Memorial Art Museum at Oberlin College have roughly paralleled major movements in Japanese printmaking from the early 18th through the late 20th centuries. Through July 1, the exhibition A Century of Asian Art at Oberlin: Japanese Prints presents works by master printmakers from several periods. Curated by Kevin R. E. Greenwood, the Joan L. Danforth Curator of Asian Art, with the assistance of Oberlin College senior Elka Lee-Shapiro, the exhibition comprises more than 100 woodblock prints that span 270 years of history, and offers a dual chronicle of both this printmaking history and the growth of the museum’s collection.

The year 1950 marked the earliest and most significant major contribution of Japanese prints to the Allen: more than 1,500 works from the 17th to the 20th centuries, the bequest of Mary A. Ainsworth, an 1889 graduate of Oberlin College. Ainsworth’s prodigious print collection originated on a 1906 solo trip to Japan. Her contribution amply represents the Japanese Edo period (1603–1868), an era of political unity following centuries of civil war. During much of the Edo period, ukiyo-e (pictures of the Floating World) was a popular genre of prints. In its first two centuries, the genre was characterized by colorful, idealized representations of actors, and pictures of “beauties,” such as female entertainers and courtesans, which abound in A Century of Asian Art at Oberlin. To the average Japanese consumer of the period, the prints offered enticing depictions of lives of carefree extravagance and indulgence. To museum visitors, they offer an opportunity to engage with some of the highest-quality works to emerge from the Japanese printmaking tradition of the 17th and 18th centuries.

The exhibition also features exemplary works of the surimono genre, which emerged in the latter part of the Edo period. A far cry from the popular, mass-produced ukiyo-e, surimono were limited-edition works commissioned by poetry clubs. The subject matter of these works is often obscure, rife with wordplay and references to classical Chinese and Japaneseliterature. A series of donations from Paul F. Walter in the 1980s and 90s significantly expanded the Allen’s holdings in this genre. Walter, a student in the Oberlin College class of 1957, was a New York-based art collector. In addition to surimono prints, Walter contributed works from the Meiji period (1868–1912), a tumultuous era that followed the forced opening of Japanese ports to U.S. commerce, and saw the island transform from an isolated feudal society to a nascent imperial power. A Century of Asian Art at Oberlin showcases some of Walter’s exemplary donations from this period, including Hōzan’s Naval Encounter near Port Arthur during the Sino-Japanese War (1894), a dramatic propaganda triptych that depicts the confrontation between a single Japanese ship and three Chinese adversaries, and reflects Japan’s expansionist fervor in the final decade of the 19th century.

In accordance with the nation’s increasingly global orientation at the start of the 20th century, works from the next major innovation in Japanese printmaking—shin-hanga (new prints)—display the notable influence of Western techniques.Shin-hanga, which originated around 1915, revived traditional ukiyo-e subjects, including both landscapes and “beauties,” but recast them in an impressionistic style. The works of one of the most celebrated masters of the genre, Yoshida Hiroshi (1876–1950), are especially well-represented in the Allen’s collection, thanks to the generosity of Owen T. Jones, a 1929 Oberlin graduate, and Margaret M. Jones, his wife. In 1997, the couple donated 27 Yoshida prints that Mr. Jones had purchased in Japan immediately after World War II, while serving in the navy. Thirteen prints from the Jones donation demonstrate Yoshida’s deft and atmospheric use of color. Other prominent shin-hanga designers are represented in a second major donation received in 1997: Sarah G. Epstein’s gift of 85 prints, which spans the late Edo period to the 1960s.

An art collector and lecturer, Epstein graduated from Oberlin in 1948. In addition to prints by shin-hanga masters such as Kawase Hasui (1883–1957), her donation features evocative examples of the budding sōsaku-hanga (creative prints) movement in the work of Kasamatsu Shirō (1898–1991). Influenced by Euro-American ideals of individuality and self-expression, artists in this style—who came of age in the postwar period—eschewed the collaborative workshop system that had traditionally characterized Japanese printmaking. Instead, artists worked independently to produce experimental works that appealed to Western collectors. The most diverse array of sōsaku-hanga prints represented in the exhibition come from the 1999 contribution of Dr. Sanford L. Palay.  A 1940 graduate of Oberlin College, Palay served with the Army Medical Corps in Japan, an experience which sparked his interest in Japanese art. His donation to the Allen spans the 1960s to the 90s, and encompasses not only woodblock prints, but also lithographs and etchings.

Through five decades of generous contributions from Oberlin College alumni, the Allen has amassed an impressive collection of Japanese prints. A Century of Asian Art at Oberlin: Japanese Prints offers a sampling of this collection, and a consummate perspective on an enduring and dynamic tradition in Japanese art.

In conjunction with the exhibition, curator Kevin R. E. Greenwood will give a Tuesday Tea Talk at the museum on March 13 at 2:30 p.m. 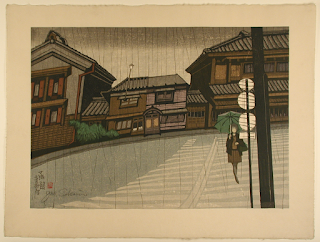 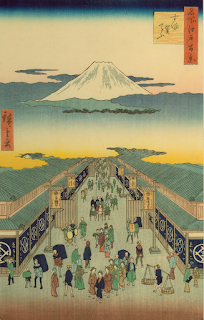 Utagawa Hiroshige I (Japanese, 1797-1858)
Fuji from Surugacho, no. 8 from the series One Hundred Views of Famous Places in Edo, 1856
Color woodblock print
Allen Memorial Art Museum, Mary A. Ainsworth Bequest, 1950.1383

Posted by AICUO Award for Excellence in the Visual Arts at 8:24 AM