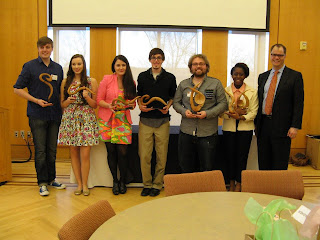 The 2013 AICUO Award for Excellence in the Visual Arts competition finalized itself with the Award Reception, which was held yesterday, April 3rd at Denison University. Nominees and faculty members from all over Ohio came to meet, view artwork, and hear of the finalists' successful academic careers at the home institutions. The first activity of the evening was a student panel discussion, moderated by Ronald Abram, Denison's printmaking professor in the Studio Arts Department. The six finalists answered questions about their experiences, their artistic interests, and their progression as both a student and an artist.
After the panel discussion, the attendees enjoyed viewing six pieces of artwork, one from each finalist. Slideshows, a tour of the Denison Art facility, and food was provided.
The Award Reception ended with the ceremonial awards procession, where C. Todd Jones, President of the Association of Independent Colleges and Universities of Ohio, handed out the various awards and gifts for all who participated. Judges, nominees, the awards sculptor, and the finalists were presented with gifts from our in-kind sponsors. The finalists were introduced by a member of their institution's faculty, including Sarah Schuster (Oberlin), Micaela Vivero (Denison), Andrew LaMoureaux (Marietta), Loyola Walter (Mount St. Joseph), and Benjy Davies (Rio Grande). Meg Leatherman, the Sculpture Design Contest Winner, was presented with an award copy of her design. The People's Choice Award for the 2013 EVAs was given to Chelsea Flowers (Denison). The Grand Award for the 2013 EVAs was presented to Matthew Gallagher (Oberlin). The six finalists will be presenting their work in Short North District galleries in Columbus, Ohio, during the May Gallery Hop. The Association of Independent Colleges and Universities of Ohio thanks Denison University and all who helped and attended this year's reception. 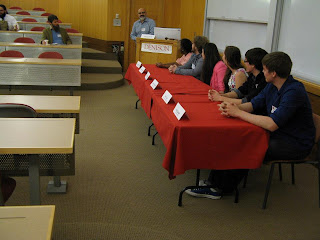 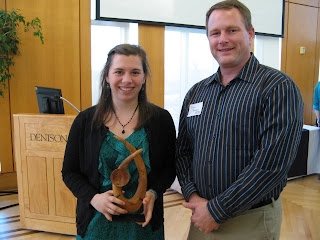 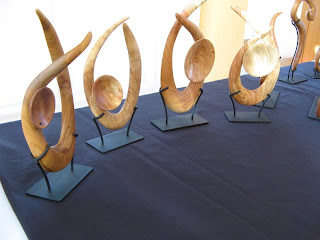 Posted by AICUO Award for Excellence in the Visual Arts at 4:29 PM